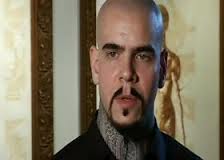 Many people would assume that an artist would use mediums such as paints, chalks, and charcoals to create pieces of art with. Without a doubt, these mediums are judged by most to be harmless. But when does an artist cross the line into using art mediums that might be considered inappropriate? This is the question some are asking Vincent Castiglia, an artist whose art medium is drawn from his own body.

Vincent Castiglia, an artist from New York, uses his blood as paint. He has been using this highly unique, watercolor-like medium for about a decade, and as a result has experienced success in his career as an artist. Castiglia commented that he purposely began using blood as paint, though in the beginning he merely “dabbed” it onto his drawings (made of pen and ink). Later he progressed to using blood to create whole paintings with.

How much blood does it take to craft just one painting? Castiglia said a 7-foot painting requires a potential 30 vials of blood. Reportedly, the out-of-the-box artist will take only “15 vials of blood at one time” from himself – he made the point that this amount of blood is smaller than the quantity in a blood bank donation.

Castiglia’s work is drawing attention from the media as well as from the art world. His paintings are popular and sell for up to $26,000. Part of the high cost of the pieces is attributed to the time it takes to complete them (some paintings take Castiglia months to finish).

When do you know that an artist has taken their desire for a creative art medium too far? When they begin to potentially harm theirself in the pursuit of creating innovative art? Some would say yes, this is going to far. Others would think pushing the limits to such a degree is good for an artist and shows a great amount of dedication to art itself. Everyone will no doubt have their own strong opinion on this point. There is one thing that cannot be argued about Vincent Castiglia’s artwork: It is literally a part of him.