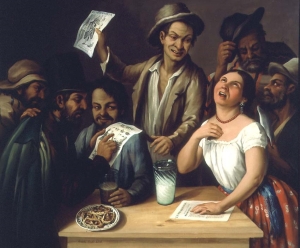 Common household settings and cooking materials were significant to Mexican painter, Jose Agustín Arrieta. This genre painter became famous after his death for portraying what he saw and experienced in nineteenth century Puebla, the town where he grew up and lived most his life.

In 1803, Jose Agustín Arrieta was born in Tlaxcala, Mexico. At a young age his parents moved to Puebla, where the young artist was a student of life, studying everyday objects and seeking to make them beautiful.
Today, there is not a lot of information circulating about Arrieta, but it seems he never left his home town – the place from which the character of his portraits and still lifes were born. In addition to being the bedrock of his inspiration, Puebla and nearby San Carlos offered fine art competitions that Arrieta participated in.

Jose Agustín Arrieta married Maria Nicolasa Lorenzana Varela in 1826. It is believed that she may have been an artist as well. This could very well be true; many noteworthy art teachers belonged to the Academy of Fine Arts of Puebla. Rather than join the academy and work with the likes of Lorenzo Zendejas and Salvador del Huerto, Arrieta forged his own path and set up a personal studio where he was able to paint portraits and still lifes that would not have been deemed appropriate to Puebla’s elite class. As a result, the artist did not earn a lot of money from his art work. In 1852, after identifying the state of his struggle, Arrieta took a counseling job in the State Congress.

Regardless of his inability to support himself financially during his lifetime, Arrieta’s work, known at the time as “cuadros de comedor” or “dining tables,” has become a symbol of Pueblo’s history. One reason why his genre paintings were given this title was because much of his work portrayed people and scenes that included images of national cuisine and traditional dishes. In fact, much of Jose Agustín Arrieta’s art can be summed up by the phrase, “good food and good drink.” This is because many of his paintings captured Mexican fruits, national delicacies, and bottles of wines and champagnes, as well as crystal glasses, common cooking pots, and serving baskets. 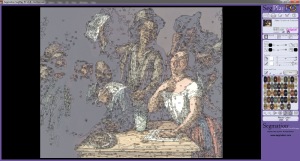 Arrieta’s legacy exists today because of the content of his paintings, as well as the unique talent he displayed. A sign of his work is the fine detail that was applied to his paintings of home kitchens and public taverns. He also had an interesting way of drawing females, who were often painted as sexy women wearing full jewelry and oriental clothing.
It is said that, in his paintings, Arrieta may have been trying to save the style of symbolic still lifes that were typical in the 1600’s, but lost in the following century when naturalism came on the scene. Even though it would have been impossible for Arrieta to receive proper training in this style of art, his choice of subject matter (i.e. Mexican foods and
Puebla cooking techniques) required a realistic approach and variety of textures.

Today, Arrieta’s paintings are seen as the result of intense motivation. The artist spent much time perfecting his drawing and composition techniques, in addition to using color, and depicting human anatomy. It is unclear how much of his talent was the result of his wife’s education, who may have been properly trained at the Academy of Fine Arts of Puebla. Still, many of Arrieta’s pieces that sell today are deemed “imperfect” because of his distorted or lack of perspective. This, however, does not detract from the timeless success of Arrieta’s art.

On December 22, 1874, Jose Agustín Arrieta passed away, leaving behind a legacy that lives in Puebla and much of the world today. In fact, his work is available to the viewing public inside Casa Agustín Arrieta, a historical Pueblano home and museum.

The Natural Side of Art